History of the Kho Kho Game and Rules

The Kho Kho game is an Indian sport commonly played in schools and colleges around the country. When it comes to Kho Kho history, every Indian knows that the game was known to be played since the earliest of times. It is played on a rectangular court, between two teams of twelve players each, of which 9 take the field and 3 are reserves.

Kho Kho is a great test of the participants` physical fitness, strength, speed and stamina and dodging ability. No one has exact knowledge on Kho Kho history or when the first game was played, though many historians say that it is actually a modified form of `Run Chase`. In the ancient era, a version of the Kho-Kho game was played on `raths` or chariots in Maharashtra. This was known as Rathera.

In ancient Kho Kho history, there were no rigid rules and regulations for playing the game. The Kho Kho rules were first framed in the early 1900's. A committee was formed at Gymkhana Poona in 1914 for framing the Kho Kho rules and the first ever book of Kho-Kho rules was published from Gymkhana Baroda, in 1924. 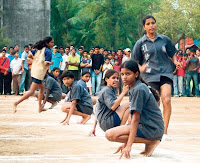 According to the Kho-Kho game rules, each of the participating teams consists of twelve players, though only nine players take the field for a contest. After the toss, one team sits in a row down the middle of the court, with alternate members facing opposite directions. They are the chasers. The opposing team sends a player in the court as a dodger.

A chaser may only run in one direction and cannot cut across the central line. If a chaser needs to catch a dodger who is on the other side of the line, he/she needs to pass the chasing job to another team-mate. This is done by touching the back of a sitter facing the other way and shouting ‘Kho’.

The main aim of the chasing team is to tag all dodgers of the opposing team in the shortest time possible. This sport is managed by the Kho-Kho Federation of India, which was created in 1956-57 at Cuttack, Orissa to popularize the Kho Kho game among the masses.

Read about other indigenous sports in India -

Email ThisBlogThis!Share to TwitterShare to FacebookShare to Pinterest
Labels: Sports

We'd love to hear from you. Please post a comment below to let us know what you think!